One of my favorite verses from Scripture is Psalm 115:1: “Not to us, O Lord, not to us, but to your name give glory, for the sake of your steadfast love and your faithfulness!” Hopefully my brief biography will show how God has been gracious and merciful towards me. 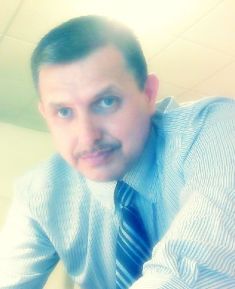 I have known the Lord and tasted of his goodness as long as I can remember since my early youth. My father, who was born and raised in Lontras – SC, Brazil, came from a Catholic family immigrants from Portugal and Holland. My mother, who was born and raised elso in Lontras – SC, Brazil, came from a German Catholic tradition. I have been a Roman Catholic all my life and actively involved in bible study, catechetics, pastoral and evangelistic work, lay renewal movements, and cooperative with Christians from other traditions and denominations.

I thank my parents who raised me in the faith, along with two brothers and ten sisters, and taught me to love God with all my heart through their example and faithfulness. My dad loved to sing every Sunday at Mass in the church choir; and I tried to sing along with him as best as I could. My mother loved to tell me stories from the Bible and she inspired me to read biographies and stories of great men and women of God, many of whom were martyrs, missionaries, and heroes of the faith. I am also grateful to the parish priests and the Sisters of Charity who inspired me with their faith and love for God. They instilled in me a desire to serve God and to be a missionary someday, if that be God’s will.

I went to Seminary in Porto Alegre RS, for eight years (high school and University) and completed my undergraduate degree in Philosofie and Teology at The Pontificia Catholic University of Porto Alegre RS – Brazil. In 1999 I was ordinied missionary priest of the Congregation of the Most Holy Redeemer (C.Ss.R.). After my ordination I went to work as missionary with others missioners in Suriname. During this time I studied English and Ducht at ABC Linguage Institut in Netherland.

The Lord fulfilled my desire to be a missionary when I joined the work in Surinam. Ten years went wonderfull In Surinam I have worked whit the poor people in ring of the town of Paramaribo. Same time I went to Batavia where Peter Donders gave his life for the poor lepers of that place. Batavia a place of prayer, meditation, a place where everyone can find peace. About Peter Donders I can say that he was an apostle of the poor. In fact, he was born into a poor family and had to lead the life of a worker before he could pursue his priestly vocation. He dedicated his whole priestly life ot the poor. In addition, he is an invitation and an incentive for the renewal and reflourishing of the missionary thrust which in the last century and in this one has made an exceptional contrubution to carrying out of the Church’s missionary duty. Joining the Congregation of the Most Holy Redeemer late in life, he practiced in an excellent way what Saint Alphonsus proposed as an ideal for his religious: imitate the virtues and examples of the Redeemer in preaching the divine word to the poor. It was very dificult for the Bless Peter Donders, but God was with him. For more information you can visit www.radiokatolica.com/batavia

In the 2002 I traveled extensively around the country (Surinam) to help with the development of Christian communities and with the training and formation of young people in Christian service and leadership. In the 2002 I worked with a group of families and singles by the parish Mary Queen of the World to re-establish a covenant community in Paramaribo and elso outside of the city, called Word of Life, as well as the development of an outreach program for training youth in service and leadership. In August of 2005, I founded with Father Bas Mulder, C.Ss.R. the RADIO KATOLICA, new catholic network en communication of the Redemptorist Congregation in Surinam. You can visit here: www.radiokatolica.com 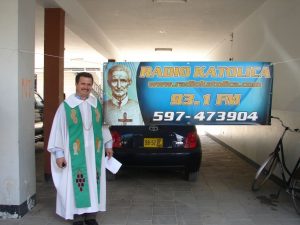 At that time I spent part time for this network broadcast of the Catholic Church. I had daily Gospel radio programma in English and in Ducht for all the country. This was an invaluable time for study and learning more about the land of the Bible and its people. Radio Katolica is a radio station of the Redemptorist Congregation. This Catholic radio station works for the Diocese of Paramaribo, in Suriname. This radio station opens and closes every day with a Christian message. During the day there are meditations, bible explanations, catholic world news, Suriname catholic news and also good music. This station also focuses on children, the sick, older people The broadcasts are in different languages: Dutch, English, Sranan, Spanish and Portuguese (Brazilian). Each Sunday the Eucharist is broadcast from the Chapel of St. Peter and Paul at 8:30 a. m. Radio Katolica operates under the direction of Father Vergilio and the Redemporist Fathers in Suriname.

In mart of 2010, I have moved to Brazil, where I join my study with new form of spiritualy as missionary of the Redemptorist Congregation. In 2012 I have concludes the master’s degree at the Catholic University of the Rio Grande do Sul, Brazil. In 2015 I have concludes my studies the doctorate at Catholic University Lateranese in Roma, Italy. Actualy I am back to Brazil and work in my parish in Lages, SC Brazil. 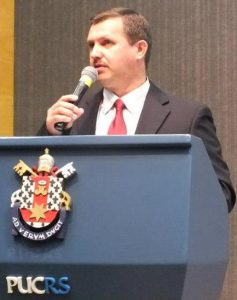 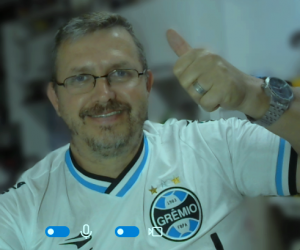 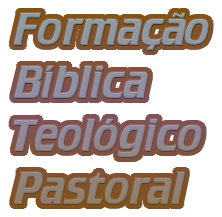